How You men can talk about women's shower?

When I think of female soul, I'm not a man, not a woman and not even mind, although I use them — I am awareness. Awareness is not not awareness is not a man and not a woman. This separation can be attributed to the mind and body, for the mind is the inner part of the body, and the body is the external part of the mind. Body and mind are inseparable; they constitute a unity. Essentially, to say "body and mind" is wrong; there is no need to use the word "and". Man is corpus-mente, even without the dash between them.

Thus, if we are talking about the body, about the mind, the words "male" and "female" is quite appropriate. However, there is something beyond these two concepts, is transcendental. This is the real core of man, his essence. This entity consists only of awareness, of presence, of observation. It is pure consciousness.

I'm not talking like a man on behalf of men; otherwise, to talk about the woman would not have been possible at all. I say this as awareness. Many times I stayed in a female body, I have lived in a male body, I witnessed the whole thing. I saw all the houses, I saw all the clothes. My words are based on the experience of not only this life but many, many previous lives. This my life just the culmination of a long, long pilgrimage.

So don't take my words as words of men or women, do not worry about it; otherwise you just will not hear me. Think of me as awareness. 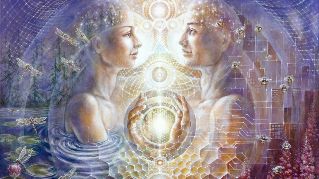 (The Dhammapada: The Way of the Buddha)

It seems to me that You're the only person on this planet who really understands women and accepts them as they are. Please comment.

I have already said that a woman should be loved, not understood. This is the first.

Life is so mysterious that it is impossible to reach its heights, it is impossible to look into her deep secrets. Any manifestation of life — man, woman, tree, animal or bird — is a study of a scientist, not a mystic. I'm not a scientist. Science itself is a mystery to me, and today, scientists have begun to recognize this. Today, they abandon their old incorrect statements that once they learn the secrets of what you need to know.

Thanks to albert Einstein science began to develop in a completely different way, because the deeper he plunged into the mysteries of matter, the greater confusion came in. Had to abandon logic and rationality. Life is not in order, because it is not subject to your logic. Logic is a quality inherent in man. Albert Einstein recalled one moment in his life, if he had doubts about whether to stick to rationality... But that would be silly. This behavior is peculiar to man, but it would be unreasonable. Even if hard to follow the logic of rationality, it becomes quite obvious that life is not going to listen to your logic; rather, logic of the mind must obey the logic of life. There comes a time when you have to reject logic, rationality and just listen to nature. I call it a higher understanding, but not in the usual sense of the word. You know it, you feel it, but you don't have the words to Express it.

I remember when the toy store a man bought a gift for my son for Christmas. Because he was a famous mathematician, the shop owner gave him a jigsaw puzzle. Mathematician tried to compile it... it was a great puzzle. He could not assemble a picture, he was sweating and began to feel uncomfortable. For his unsuccessful attempts were observed by buyers, sellers and the store owner, and he could not collect it. In the end he could not stand the nerves, and he yelled at the store owner: "If I, a mathematician can't solve this puzzle, how the child will cope with this task?"

The owner replied, "You do not understand. The puzzle is designed in such a way that no one was able to solve it — neither a mathematician, nor anyone else".

"What's the meaning of this riddle?" asked the mathematician.

"This is done to ensure that the child since childhood have learned to understand that life is impossible to solve what it cannot understand," replied the shop owner.

Life to enjoy, life can be happy you can become a part of its mysteries, but to understand it, being a bystander, absolutely impossible.

I don't understand myself. For me the greatest mystery is me. But I'll give you a few hints:

A psychiatrist is someone who for a considerable fee asks you the same questions that the wife asks you free of charge.

The keys to happiness: can you talk about love, tenderness, passion, but real ecstasy you will experience to discover that after all that, you still haven't lost my keys.

The woman at first repel the attacks of men, and then cuts his way out.

The woman ran to the police:

— See that man on the corner of the house, he gets on my nerves.

— I watched all the time, ' replied the policeman, he didn't even look in your direction.

— This is what gets on my nerves.

Romantic young man turned to the pretty woman in his bed and asked, "am I the first?"

After thinking a moment, she replied: "it may be, I have a horribly bad memory for faces."

Everything is shrouded in mystery: it is better to enjoy life than to try to understand it. In the end, the one who tries to understand life, is a fool, and one who enjoys life becomes wise and continues to enjoy, because he is aware of the deeper mystery of everything that surrounds us.

The greatest understanding is that nothing can be understood, that all is mysterious and wonderful